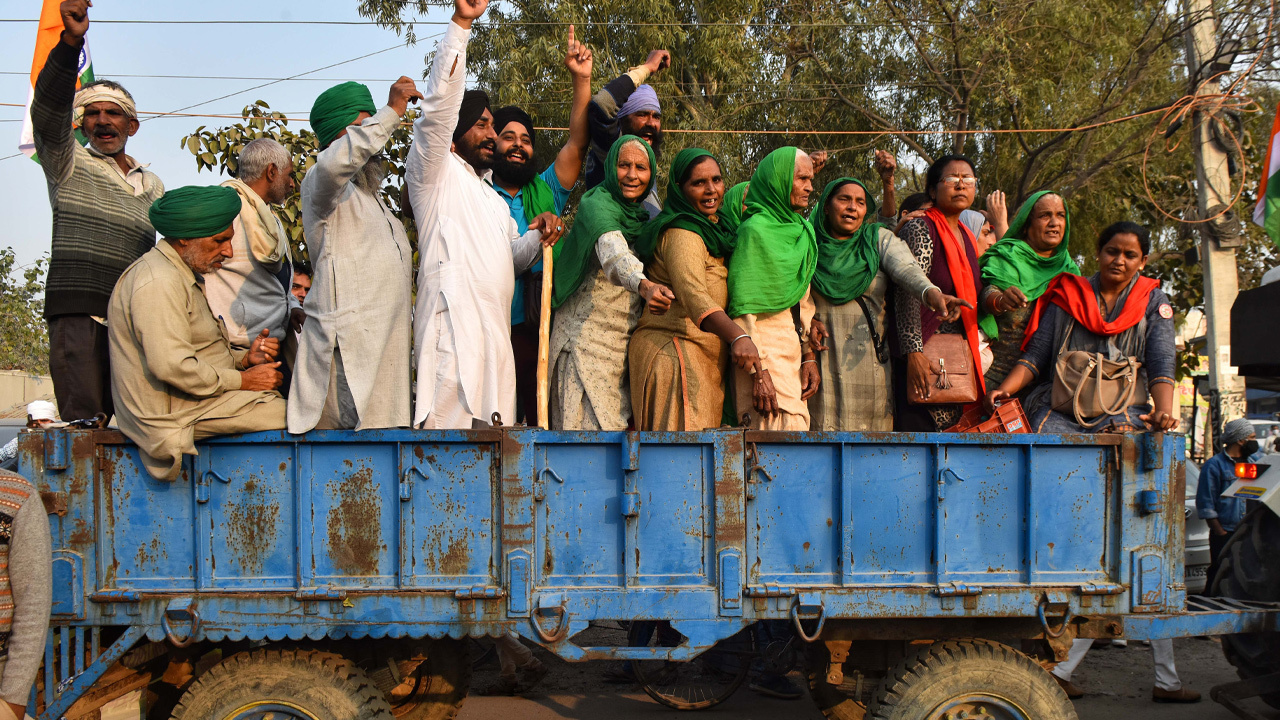 Since November 26, farmers in India have been protesting new legislation, and Canadians are joining in solidarity. Here’s everything you need to know

Across Canada, farmers have been gathering outside consulates in cities like Toronto and Vancouver in support of their counterparts in India, who have been protesting a series of agricultural laws implemented by the Indian government in September of this year. The marches in India, from the Punjab region of the country towards New Delhi, began in late November and have escalated into violent clashes between police and farmers, making international headlines that inspired peaceful protests here in Canada with calls for the Canadian government to step in. But what exactly are the Indian farmers protesting and how does it affect Canadians?

Here, everything you need to know about the ongoing protests in India, and why we should all be paying attention.

Why are farmers in India protesting?

On a micro level, these protests are about agricultural legislation. On September 20, Indian Prime Minister Narendra Modi and his government passed two agriculture bills aimed at reforming the country’s stressed farming sector.

According to BBC, the two bills passed loosen rules around the sale, pricing and storage of farm produce. Specifically, farmers will be allowed to sell their produce at a market price directly to private buyers (for example: agricultural businesses, supermarket chains and online grocers). In turn, these private businesses can hoard essential commodities for future sales.

Typically, farmers have sold their wares to government-controlled wholesale markets; these markets are run by committees comprised of other farmers who act as middlemen for brokering sales and storage. The benefit of this system, also known as the “mandis system,” is it allows farmers to sell the majority of their produce at assured prices. But with the passing of this new legislation, “the Modi government is effectively getting rid of that system,” says Jaskaran Sandhu, director of administration at the World Sikh Organization. And it’s a problem for small, independent farmers, Sandhu says, which just so happens to be the *majority* of farmers in India. “The government is also going to be removing what’s known as MSP, so the minimum set price,” he says, “which would do away with a  kind of  guaranteed return on crop; for pretty much all farmers that allows them to have some predictability in their income stream so that they can plan for the next year.” According to BBC, many farmers are nervous that this is a step towards abolishing the Mandi system altogether, which would mean the end of wholesale markets and assured prices, leaving them with no back up option; for example, if they’re not happy with the price offered by a private buyer, they can’t use the Mandi as an alternative option or bargaining tool.

But these protests aren’t *just* about the new legislation itself, but rather, about the way the legislation was implemented. “First and foremost, [the farmers] weren’t consulted properly and the Indian government bypassed the normal hearings that would be done on something like this in order to pass it through quickly,” Sandhu says. Which is true. The bill was passed in the midst of the ongoing COVID-19 pandemic, which may have contributed to its acceleration, but which meant that the typical processes of consulting with farmers wasn’t accessible. In September, when the bill was passed, Modi and his government were heavily criticized by even members of their own party for the speed with which the bills were passed.

The big issue, Sandhu explains, is that this isn’t the first time the current government has passed a bill without proper consultation. In November 2016, Prime Minister Modi decided overnight to ban Rs 500 and Rs 1000 as legal tender, leaving citizens in a lurch, and in August 2019, the government stripped the state of Kashmir of its autonomous status in a controversial and highly contested move.

Why would the government do that?

So, if it’s so controversial, why exactly would the government implement this new legislation? “In the government’s eyes, this is modernizing farming and bringing reform into the farming sector in India,” Sandhu says. In fact, Prime Minister Modi called the decision a “watershed moment,” with the government projecting that support plans in the agriculture sector will double farmers’ income by 2022. But that doesn’t mean that this is necessarily the way to go about it.

“I want to be clear, farmers have called for reform  for decades,” he emphasizes. “There’s [just] a stark disagreement on what that reform looks like.” As opposed to the corporate model Modi’s government has implemented, Sandhu says farmers want a more holistic approach to farming reform. It’s something farmers *have* been asking for, for awhile now. In fact, between December 2004 and October 2006, the Swaminathan Commission—a commission headed by agricultural scientists to address issues in farming—submitted five reports identifying causes of farm distress and suggesting ways in which the government could support farmers. According to India Today, since 2006, farmers have been calling for these suggestions to be implemented, among them the statement that “farmers [need] to have assured access and control over basic resources including land, water, bio-resources, credit and insurance, technology and knowledge management, and markets.”

The Swaminathan reports have gone largely unacknowledged by the government. ”It’s kind of  a re-imagining of how to support folks on the ground,” Sandhu says of what farmers need. “This corporate privatization model is not what they asked for.”

So why exactly does farming need reform? For a lot of reasons. ”There’s issues with water tables in India, especially within the Punjab region, depleting. There’s been environmental impacts as a result of the green revolution back in the sixties, when modern pesticides were introduced that have caused irreparable damage to ecosystems and lands,” Sandhu says. In addition, due in part to diminishing economic clout, farmers in India are currently facing a suicide epidemic. According to Al Jazeera, more than half of the country’s farmers are in debt, with India’s National Crime Records Bureau reporting at least 20,638  farmer deaths by suicide in 2018 and 2019.

How does this affect farmers?

The major issue farmers have with the new legislation is the fear that it’ll push out the Mandi system entirely, forcing them to only work with—and at a disadvantage to—private corporations. If these corporations deal with farmers directly—in what’s called contract farming, dictating produce prices—”a lot of farmers feel like it’s an asymmetrical negotiation with corporations who will then box them out or force them into more difficult situations where the corporation is going to turn around and take advantage of them,” Sandhu says, “whether it’s buying up land, whether it’s forcing up prices on things and making it unaffordable for farmers;  they’re going to be at the whims of private interest versus public interests.”

It’s also important to note that the agricultural sector employs 80% of working women in India; with 48% of that number engaged as self-employed farmers, per 2018 stats from Oxfam India. This means that women and their livelihoods are disproportionately impacted by these new bills.

What has the response been from the Indian government?

So far, the response has been not so great. When farmers initially started marching towards New Delhi on November 26, they were met with barricades along the route, with the government going as far destroying parts of the national highway and digging trenches at certain points to block their path. For Canadians: “That’s the equivalent of the federal government in Ottawa going to the 401 [highway] and essentially bulldozing sections of it,” Sandhu says. In addition, police have released tear gas and used water cannons, as well as physical brutality against protestors. “There’s images of police attacking and protesters with sticks, beating them up; and [just] indiscriminate violence from the state,” Sandhu says.

And what does Canada have to do with this?

While Sikh Canadians may make up just over 1% of Canada’s overall population, they have strong ties to their communities and have a visible presence in Canadian culture, society and business. And many Punjabi Canadians still have family back home, making their plight a personal one, and therefore making the protests in solidarity across Canada unsurprising. “Those are our family and friends; they’re our mothers, our fathers, our elder brothers and sisters,” Sandhu says. “So there’s a deep, personal connection that we’re marching in solidarity here with.”

“A lot of [Canadians] are connecting through India and even have land there,” says Suka Kahlon, a B.C. berry farmer whose family has been in the industry since the 1980s. “[These protests] are really important, as far as the political situation back home, and it’s important that the agriculture community in the Punjab and the rest of India does well and continues to do well.”

And having Canadians protest *is* helpful, because it puts pressure on the  Indian government and signals to Canadian politicians that this is an issue that requires international scrutiny. For his part, in early December Prime Minister Justin Trudeau spoke out about the protests and in support of the farmers, stating: ”We believe in the importance of dialogue and that’s why we’ve reached out through multiple means directly to the Indian authorities to highlight our concerns.”

“The protestors [in India] are literally risking their lives by doing this, and without international scrutiny, there is nothing stopping India from resorting to statewide violence,” Sandhu says. “By protesting at Indian consulates around the world, including in Canada and getting politicians and Prime Minister Trudeau to speak out on it, India has to ensure that the people protesting are respected and that a state security crackdown doesn’t happen.”

So, what happens next?

The government has to listen. “This specific issue can be solved,” Sandhu says. “I think that’s why they protest, because they think there’s a solution here.” And the solution is re-appealing the implemented legislation. “The farmer unions have been pretty steadfast in that there’s no compromise on this issue. So the only reality here is that the government, take these suggestions and it goes back to the drawing board on what reform looks like.”

Kahlon agrees. If the farmers do win this dispute, he says, it’ll be a symbolic win, but important, as hopefully indicative that the government can’t push *anyone* around, and has to listen to the country’s citizens and their needs. “If the government appeals those law, it’ll only go back to the status quo, and that wasn’t a perfect situation,” he says of farming reform. “What’s more significant would be the BJP [government party] having to pull back and sit back and say, ‘Oh, the people have come together and we’re willing to listen and we can’t just push our agenda forward.’ I think those are the real issues behind the headlines.”

And until then, the farmers will keep protesting. CTV News reports that some protestors have stocked up on six month’s worth of food supplies, should it come to that. “For the Sikh faith, you’re supposed to stand up against all forms of oppression, irrespective of whether it actually impacts your community or not,” Sandhu says. “So the Sikh psyche is one designed for fighting for rights, human rights, decency and respect.”

FLARE has reached out to the office of Prime Minister Modi. This story will be updated with any response.

Jane Fonda Reflects on Her Past Eating Disorder: “It’s a Very Lonely Thing”
Lipgloss Nails Were Made for Minimalists
The Viome Full Body Intelligence Test Gave Me Surprising Info About My Heart Health
Should We Really Expect Honesty from Beauty Influencers?
An Inside Look at Canadian Artist Maxwell Burnstein’s Latest Collage Inspiration: LOUIS XIII THE DROP