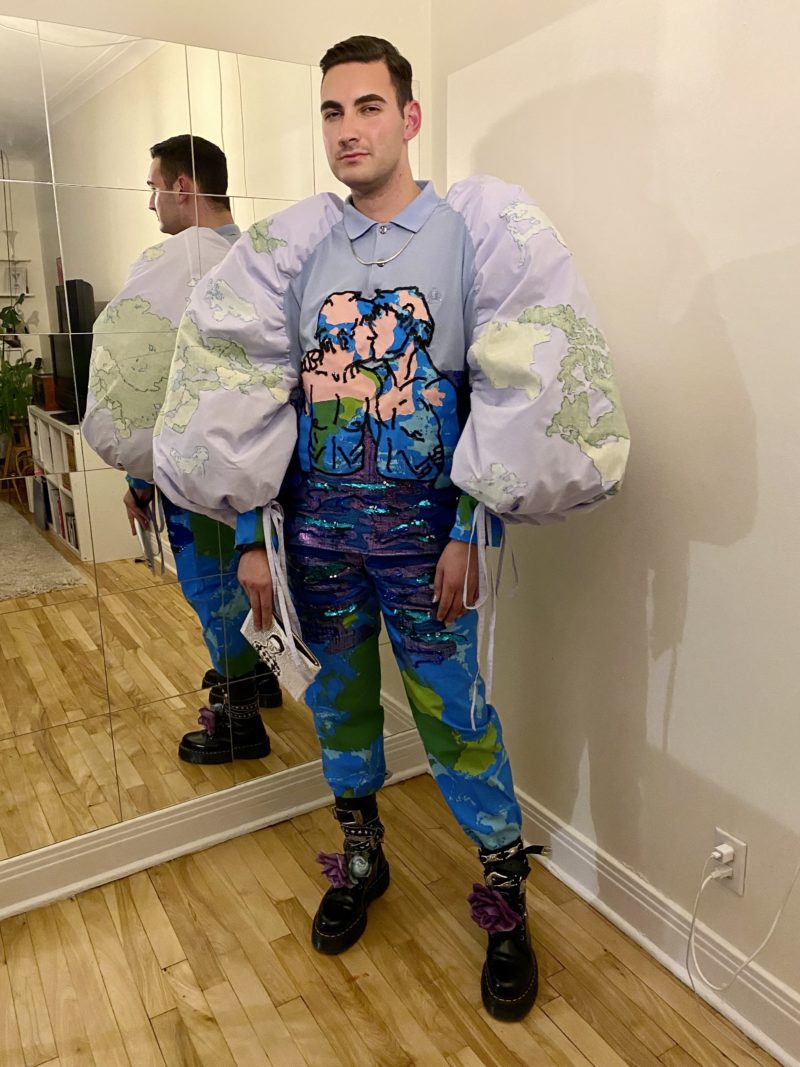 He even got reposted by Dan Levy!

We declare the winner of this year’s Halloween to be Canadian fashion designer Adrian Arnieri, who recreated the iconic look Dan Levy wore to the Met Gala this past September.

On Sunday night, the founder and creative director of Arnieri took to Instagram to show off his custom ensemble, and the accuracy is nothing short of awe-inspiring. From afar, fans of the Loewe look will quickly acknowledge the true blue tones, glittery accents and voluminous map sleeves. However, the devil is in the details (a phrase befitting the spooky holiday), as Arnieri masterfully mimicked Levy’s dainty gold chain, exaggerated ribbon cuffs, embellished boots, and glitter purse.

While praise has been pouring in in the comments section— see the six clapping emoticons from Levy’s stylist Erica Cloud and Tommy Dorfman’s “incredible” — the ultimate seal of approval came this morning as the Schitt’s Creek star shared Arnieri’s costume on his Instagram Story.

“My friends and I had stayed up doing our little Halloween movie night and tarot card reading. When I checked my phone, everyone had been sending me messages like, ‘Did you see Dan Levy’s story?! He reposted you!’” Says Arnieri over the phone. “And then to see that he put the emoji of a head explosion and also tagged [Loewe creative director] Jonathan Anderson was just incredible.”

The original garment, created by Anderson, was inspired by two works from American artist and AIDS activist David Wojnarowicz entitled “F*ck You F**got F*cker,” 1984, and “Untitled (One Day This Kid…),” 1990–91. The pieces are famed for confronting the systematic oppression of the LGBTQ+ community through the depiction of two men kissing and satirizing a homophobic cartoon the artist had come across. This political aspect of the design made Levy’s choice especially poignant for Arnieri.

“This look was created to represent hope and to celebrate the queer community,” writes the former fellow of The Suzanne Rogers Fashion Institute at Toronto’s Ryerson University, on his post. “I confidently wear this costume for Halloween because of everything it represents to me and a large community of people just wanting to be loved.”

The morning after Halloween, FASHION sat down with Arnieri to chat about the Canadian’s love of costumes, repurposing materials and how he created the Met Gala ensemble Dan Levy wore in two days!

Have you always been a fan of Halloween?

Absolutely! For me, it’s always been about more than just candy. Since I was a little kid, it’s been a time for me to express myself and incorporate my art, fashion, and career into one night of fun, where everyone gets to dress up and have a good time.

Why did you choose to recreate the look Dan Levy wore to the Met Gala for Halloween?

I always look to the Met Gala, designers and pop culture for my costume but being a fashion designer myself, that’s just something I love to look at regardless of Halloween. I’ve been a huge fan of Dan Levy since seeing him on Schitt’s Creek, but this outfit also spoke to me on a personal level because of its LGBTQ+ message. [This look is] everything that I want to do as a designer, and I just wanted to see if I could bring this to life myself. I honestly didn’t know if I was even going to be able to create anything close to it, so I’m proud of the results.

What does the message behind Loewe’s design mean to you?

I loved the spin that Dan Levy and Jonathan Anderson took on David Wojnarowicz’s work [which confronts homophobia] and how they made it into a statement about the LGBTQ+ community. Although there is still a fight for equality, it’s just so beautiful to see it represented on a red carpet and the power of fashion.

It’s emotional for me because the text [on the purse] describes the artist’s rough childhood, and it makes me reflect on growing up in the closet and going to Catholic school where I was bullied for being different and not knowing who I was.

And although I rarely have people yelling slurs at me anymore, those moments have still stuck with me — it’s almost like some kind of trauma that’s been burned into my brain. So wearing this costume was kind of like my F–you back to everyone else.

How long did it take you to recreate the garment?

I actually created this costume in two and a half days because I had just returned from my vacation in Calgary and only had a few days before I left for Montreal. There were quite a few all-nighters, but it honestly was the excitement of just getting it done and surprising my friends that kept me going. I didn’t tell anyone what my costume was just in case I couldn’t finish it!

What materials did you use?

I used whatever scrap materials and resources that I had, and it worked out really well. I found only one type of Atlas fabric downtown, so I picked that up, along with a $3 Ralph Lauren polo from Value Village and then I integrated some fabric from an old bedsheet. I used the same Atlas print for the pants and cut out all the little islands. I created the water from different sequins and spandex scraps and just organically cut out shapes and machine sewed everything together. But I hand-stitched all the black sequins that outline the figures. It was super crazy, but there was no other way for me to do it. I love a good sequin, and I wasn’t going to pass up an opportunity to have a little sparkle on my costume.

How did it hold up during the night?

It held up really well! It did great as we hit the dance floor, and it kept me warm in the Montreal weather. I just felt so beautiful, and just to know the message behind it made me feel even better. Some people dress up for Halloween to escape, and they want to live out a fantasy. And I felt like I was more me in this outfit than I’ve ever been.

Are you already feeling the pressure for your costume next year?

Absolutely! How do I outdo myself? I will definitely look at next year’s Met Gala for inspiration.

Hailey Bieber’s New Haircut Is Giving Margot Tenenbaum
This Calming Supplement Eased My Tension Headaches Without Irritating My Gut
Johnnie Walker Unveils Exclusive Collaboration with Angel Chen in Celebration of Lunar New Year
Where Are All the Plus-Size Male Models?
Join One of Lizzo’s Dancers For a 30-Minute Hip-Hop Dance Cardio Class