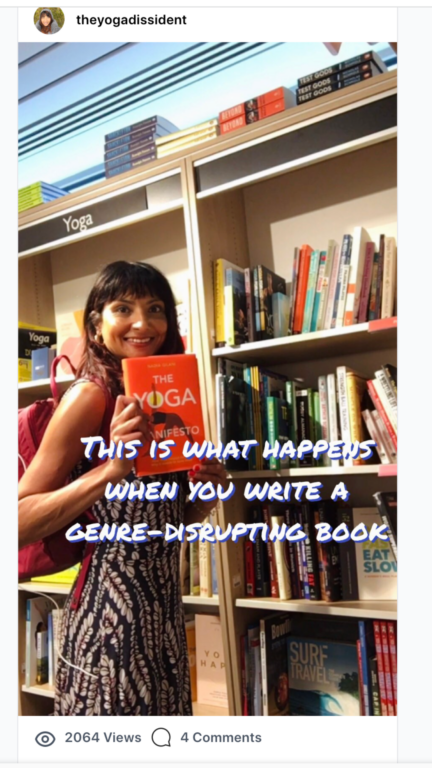 The following is an excerpt of the book, The Yoga Manifesto and interview with author and yoga teacher Nadia Gilani.

How did an ancient spiritual practice become the preserve of the privileged?

Nadia Gilani has been practising yoga for twenty-five years. She has also worked as a yoga teacher. Yoga has saved her life and seen her through many highs and lows; it has been a faith, a discipline, and a friend, and she believes wholeheartedly in its radical potential. However, over her years in the wellness industry, Nadia has noticed not only yoga’s rising popularity, but also how its modern incarnation no longer serves people of colour, working class people, or many other groups who originally pioneered its creation.

Combining her own memories of how the practice has helped her with an account of its history and transformation in the modern west, Nadia creates a love letter to yoga and a passionate critique of the billion-dollar industry whose cost and inaccessibility has shut out many of those it should be helping. By turns poignant, funny, and shocking, The Yoga Manifesto excavates where the industry has gone wrong, and what can be done to save the practice from its own success.

We sat down with Nadia Gilani, to talk about the new book:

How did yoga really save your life?

Yoga has been in my life for a long time but it’s definitely been an on and off relationship at times. I came to the practice when I was 16 and in a bit of a bad way emotionally and probably depressed though I didn’t know it at the time. Yoga had an uncanny way of somehow sprinkling a bit of magic into my life. It didn’t cure me or fix everything overnight and there were times I gave up on it when life got tough but it’s been the thing I’ve come back to more than anything else which I think says everything. It saved me by planting that seed so early on in life that I felt drawn to return to when I needed it and felt able to.

Can your book help people seeking to understand more about cultural appropriation?

The Yoga Manifesto is essentially a personal story, so it’s a memoir through which I weave in my relationship with yoga and then look at yoga’s relationship with the modern world. To do that we have to look at where yoga came from, where it now is and where it might be headed next. The questions I get asked about most are from people who are confused about what cultural appropriation is, or what the difference is between appropriation and appreciation so I’ve tried to shed some light on that. I’m not militant about it my any means and understand that mistakes will happen, but the way we might respond to those errors or even just listening to people who might raise concerns is a step in the right direction as far as I’m concerned. I’m not here to tell anyone off, I just want to lift the lid on things so we’re all better informed and keep learning. Ultimately it’s about being culturally sensitive and I suggest ways that readers can do that in the book.

What’s your favourite chapter in the book about and why?

This is a difficult question! I like different parts of the book for different reasons so I’m going to have to bend the rules a bit and answer with a few sections. Some of my favourite parts of the books are what I’ve called interludes. They’re shorter vignette- like passages in between the main chapters that act as a pause from the main narrative for reflection. I wanted to play with the book’s structure but without confusing the reader so they’re designed to fill in bits of the story in a subtle, poetic way. If I had to pick a favourite it would be a tough call between Chapter 1 because the story I tell there about the teenage boys I taught always warms my heart. I’d also pick Chapter 10 which was an important chapter for me because it brings the story up to the present day. It was surprisingly easy to write because I was pent up during the last COVID-19 lockdown in the UK in 2021. I had lots to say and no one to say it to, so I wrote it all down.

How does your book bring hope? 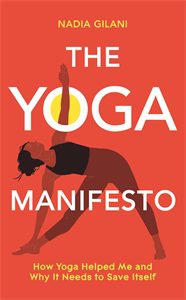 I honestly don’t think there’s a book like this that’s been written before. There’s a lot in it: personal story, history of yoga, an analysis of our modern world and how yoga can interrelate with politics in ways that are both good and bad. It’s not a yoga book really, but more of a life book because that’s what interests me most – writing about how life feels: the joy and miracle of it as well as the pain and wounds we carry. It’s not a how to do yoga book or a tips and tricks guide to becoming a yoga teacher. That said I’ve had emails and messages from many people who’ve read the book telling me they feel seen and that the book has helped them in their practice or inspired them in their teaching which I wasn’t expecting and am delighted to hear.
I want it to continue helping people. That’s my biggest hope.

Next time your practicing your Sun Salutations and finding it a challenge, think of this:

I stand at the top of the mat, feeling stiff, achy and heavy. Big toes touching, heels apart. I lift all ten toes off the floor, spread them and place them back down. I stand in Samasthiti, Equal Standing Pose, (commonly known as Mountain Posture).

I pause.
Can I be bothered to practise now?
My body hurts.
Life hurts.
What’s the point?

It’s the afternoon and I usually do this in the morning. But I’m anxious and jumpy so I stick with it. Everything begins with the Sun Salutation – the backbone of all postural practice. Even when there’s no time to practise, I always do this. Over and again until I am tired and feel I will be able to sit still. When I first learnt the Sun Salutation it reminded me of Namaz – the Muslim practice for performing prayer, which involves raising arms and bowing down. This familiarity, given my Muslim roots, gave me a fondness for this series of movements. I bring my palms together, thumbs to chest and quickly whisper the Ashtanga Yoga opening chant. Then, inhaling and reaching arms up, pressing palms together, I look at my thumbs, exhaling as I fold forwards and place palms flat on the floor.

I inhale, extend my hurting heart forward, then exhale and jump into a plank position. I lower my body down, hovering above the mat in Chaturanga Dandasana or Four-legged Stick Pose. Inhaling again, I roll over the toes and lift into Upward Facing Dog, exhaling into Downward Facing Dog Pose. I notice that I’m holding my breath.

It’s hard to breathe. My hips are stuck. I feel the same way about life at the moment.

Still in Downward Facing Dog, I spread my fingers wide, shoulders away from the ears, tailbone to the sky, heels sinking towards the earth. I inhale one, exhale one. Inhale two, exhale two. I count five long jaggedy breaths like this. Then, inhaling, I jump feet to hands, lengthen forward and exhale to fold. Inhaling again, reaching arms up and exhale arms down, back to the Mountain.

I am solid as a mountain, I tell myself.
Firm as the earth.
A knot in my stomach tightens, telling me otherwise.
I must keep pushing through.

I start counting silently in Sanskrit, which sometimes helps block out the mental noise that never seems to stop. Ekam arms up, dive fold forward, trini lift heart, chatvari jump back and lower down. I keep going. My body’s weight is starting to spread more evenly in my feet, the oil in my hips starting to loosen things. Soon my brain might catch up. I take five breaths in Downward Dog again. I’m tired and distracted.

Maybe I’m hungry, I should stop, a voice in my head says.
Keep going, another one suggests.
Okay then.

I continue, inhaling then reaching up, exhaling and folding forward. Now the breath feels like it’s leading my movement. A lightness arrives in my body and my mind is narrowing its focus. The yoga is gaining momentum. This is what the physical part of the practice is for – preparing the body for meditation. I’m ready now.

The following is an excerpt of the book, The Yoga Manifesto and interview with author and yoga teacher Nadia Gilani. 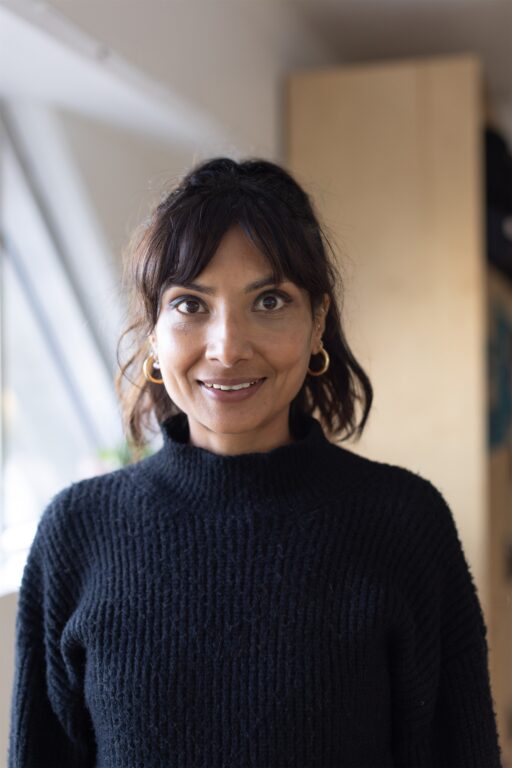 Nadia Gilani is a writer and yoga teacher. She first discovered yoga after her mum took her to a class in the 1990s – over twenty years ago. She has been practising ever since. Nadia has extensive experience of working with people with different bodies and from all walks of life, from complete beginners to those who are more experienced, teenagers to the over-seventies, refugees and asylum seekers to domestic violence victims, people living with mental illness and those in recovery from substance misuse. Nadia is deeply committed to making yoga inclusive. Her teaching approach is contemporary, non-dogmatic and explorative, while maintaining a deep respect for the ancient Indian practice. Nadia’s working background is in news journalism and communications, which she did for a decade before teaching yoga and meditation. The Yoga Manifesto is her first book.

The Yoga Manifesto Workshop & Book Tour 2022-2023. The (DIY) Yoga Manifesto tour 2022-2023 will be a series of workshops with Nadia around the UK including a yoga practise and Q&A to share ideas and conversation in a speakeasy-style get together. Click the links below for further information and to book directly with the studio.

Now’s the Best Time to Buy Yourself Diamonds
I’m Sorry, But the Peplum Is Back
Ashton Kutcher Opens Up About “Really Painful” Pregnancy Loss With Demi Moore
The Viome Full Body Intelligence Test Gave Me Surprising Info About My Heart Health
Dorian Who Releases a Thought-Provoking Collection + More Fashion News