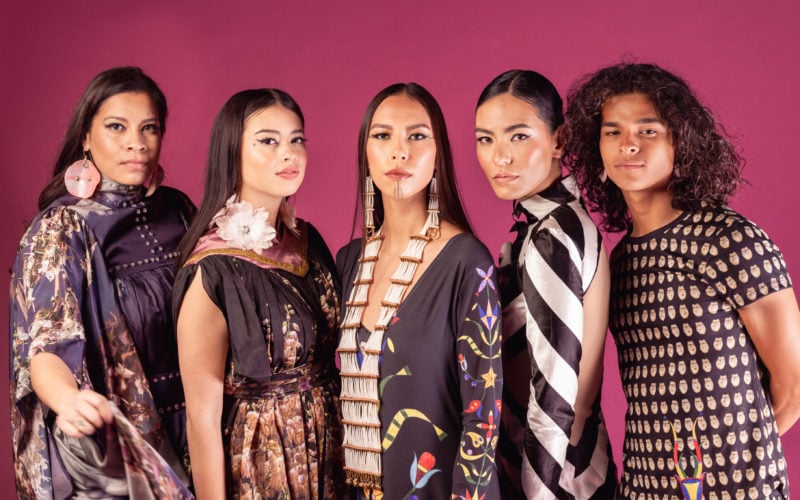 Style was on full display.

Taking over the streets of downtown Santa Fe in white tents and technicolour outfits, the Santa Fe Indian Market celebrated 100 years this past weekend—and the event was filled to the brim with stunning displays of Indigenous art, fashion and culture.

The New Mexican event included nearly 1,000 Indigenous artists from more than 200 nations and communities across the United States and Canada, many of them first-timers and others whose families have been part of the Pueblo tradition for generations. It also attracted Indigenous and non-Indigenous visitors from all over the world.

Here were some of our favourite moments from Santa Fe Indian Market’s centennial:

As a juried market, each piece sold among the hundreds of white tents lining the downtown streets had to go through a rigorous approval process to ensure authenticity.

White Otter Designs’ Jaymie Campbell—who is Anishnaabe  originally from Curve Lake First Nation in Ontario—creates trillium-shaped beaded earrings and quill roll necklaces for the market. She says that the intense application process ensures the validity and quality of the artists’ work. “It also allows you to really get paid what pieces are worth, because people understand the value of the work and that was a difference I haven’t experienced before.”

Taking part in the market was “such a level up from anything that at least I’ve participated in,” says Campbell, who now lives in British Columbia. She drove down with a handful of other art market participants from the province, including custom moccasin maker Jamie Gentry). Campbell and her booth-mate Niio Perkins from Akwesasne Mohawk First Nation in New York state both sold out of their pieces within the first few hours of the market.

Other market participants included Elias Jade Not Afraid, an Apsaalooké bead artist from Montana who was selling large geometric beaded bags with dentalium shells and elk ivory, and a show-stopping purse with a blue rose beaded onto the smoked deer hide.

Juneau, Ala. beadwork artist Jill Kaasteen, who is Lingit, Chookanashaa, and Xunaa Kaawudax, was also there for the first time, showcasing the two iconic medallions she made for the TV series Reservation Dogs. The phallic-like necklaces, one shaped like a pickle and the other a microphone, were a key joke in a first season episode, and Kaasteen says that market-goers’ delight were the best part of the weekend. “It’s so fun to see people’s reactions recognizing it, and these are the exact pieces.”

This year’s event was a magnet for celebrity guests too, including Prey star Amber Midthunder, Reservation Dogs’ Woon-A-Tie, Dark Winds’ Jessica Matten, Kiowa Gordon and Zahn McClarnon, and Rutherford Falls’ Jana Schmieding and Sierra Teller Ornelas. Many of the stars were taking part in panels discussion on the future of Indigenous innovation, while others were found walking the runway shows and shopping in the market.

These Are the Sexiest Movies on Netflix
All Your Day Needs Is This 10-Minute Latin-Inspired Dance Workout
The Most Jaw-Dropping Looks From the 2023 Grammy Awards
I’m Sorry, But the Peplum Is Back
Why Levi’s 501 Is Still the Most Iconic Pair of Jeans