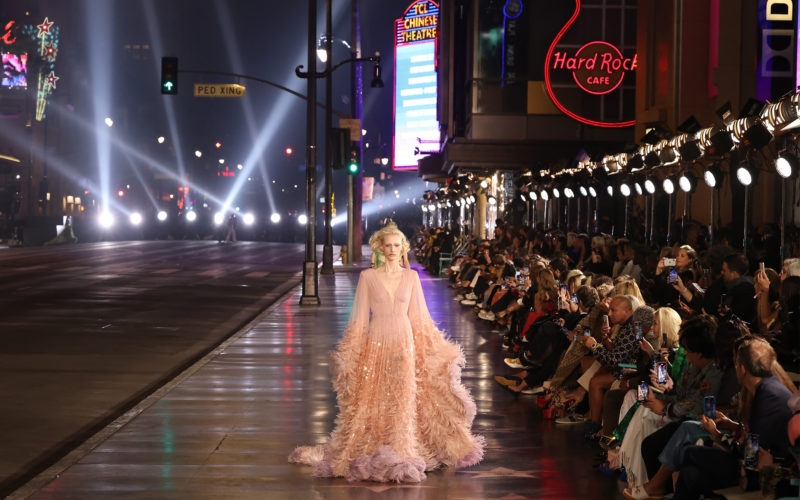 “Hollywood is, after all, a Greek temple.”

Everyone has a Hollywood fantasy. It’s the romanticized version we all grew up daydreaming about, filled with dazzling lights, stars on every corner and cutting edge fashion. On the evening of November 2, Gucci brought that fantasy to life. The fashion house shut down Hollywood Boulevard and used the Walk of Fame as the runway for its first in-person show since before the pandemic: Gucci Love Parade, a collection of over 100 looks worn by an eclectic cast including Jared Leto, Jodie Turner-Smith, St. Vincent, Phoebe Bridgers, Janaya Khan and Macaulay Culkin.

The Gucciverse created was one full of glamour and allure. Creative Director Alessandro Michele pulled inspiration from his love for classic Hollywood and his familiarity with the escapism of show business. As a child living in a squat in the outskirts of Rome, he relished in tales of the “dream factory,” as told to him by his mother, who was an assistant at a production company. “Hollywood seemed a bright and shiny star,” he said in a press release. “Nine letters dripping with desire.

“This boulevard of stars lends perfect support to my uncurbed love for the classical world. Hollywood is, after all, a Greek temple populated by pagan divinities. Here actors and actresses are acknowledged as heroes of the myth: hybrid creatures with the power to hold divine transcendence and mortal existence at the same time, both the imaginary and the real.”

Michele’s weaving of celebrities and deities seems especially fitting now, at a time when just about anyone can cultivate a fanbase on social media. Be it Beyoncé or a Gen Z TikToker filming videos in their bedroom, we tend to bend the image of public figures in our minds, morphing them into the people we want them to be, rather than accepting that they are, like us, just human. This glamourization of the stars can be traced right back to Hollywood.

The Gucci Love Parade was fittingly packed with celebrity guests who showed out in Hollywood-themed attire. Among them were Billie Eilish, who wore a lace maroon getup paired with a 1920s-inspired headpiece — still sporting her platinum blonde hair, of course. ‘90s Hollywood darling Gwyneth Paltrow also made an appearance, donning an updated version of the red velvet Gucci suit she wore to the 1996 VMAs. Other guests included Lizzo, Miley Cyrus and Dakota Johnson.

Through the Gucci Love Parade, Alessandro Michele brought the mythology of Hollywood to life, even if just for one night. Beneath its shining exterior, the show was a reminder that the tale of Hollywood is a product of mythology, much like ancient lore.

Machine Gun Kelly’s Grammys Red Carpet Interview Turned Into a Vulnerable Therapy Session
These Are the Sexiest Movies on Netflix
Should We Really Expect Honesty from Beauty Influencers?
Do This Simple Arm Warmup Before Any Upper-Body Workout
Now’s the Best Time to Buy Yourself Diamonds