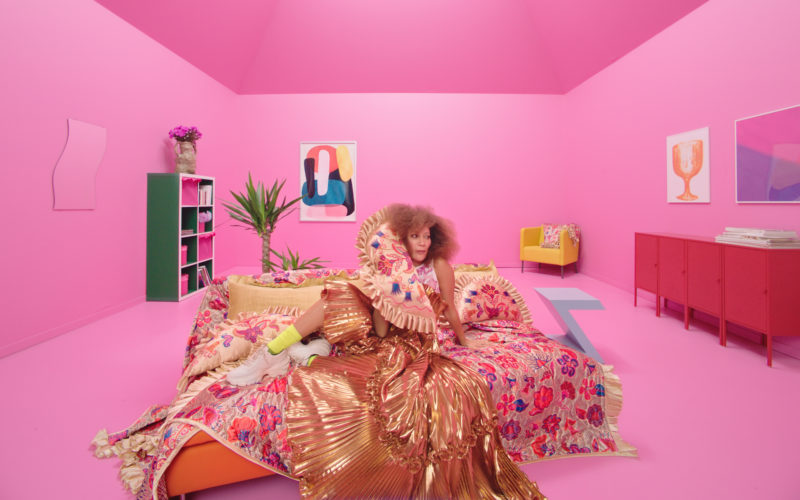 Plus Dr. Martens releases new footwear with A-COLD-WALL* and Athleta comes to Canada.

The Ikea x Zandra Rhodes Collection is nothing short of bold

In a press release, British fashion and textile designer Zandra Rhodes describes her new Karismatisk collection with Ikea as “functional and fabulous” and fabulous it is! A departure from the sometimes stark Scandinavian aesthetic that the home goods retailer is known for, flamboyant prints and colours adorn pillows, sheets, rugs and even a room divider. Ruffles are added to boxes, vases resemble Tetris pieces, and lampshades shimmer with iridescent panels in the whimsical offering. Available starting September 1, don’t blame us if you leave with more than just Swedish meatballs.

Canadians can now add Athleta to their athleisure lineup. August 31 marked the Gap Inc. brand’s online debut in Canada, with brick-and-mortar stores to follow. The first Athleta store in Canada will open later this month at the Park Royal Shopping Centre in West Vancouver, followed by a location at Yorkdale Shopping Centre in Toronto in November. Over 70 percent of Athleta pieces are made from sustainable materials, including an assortment of activewear, outerwear and lifestyle products. Did we also mention there’s free shipping on all orders over $50?

Dr. Martens x A-COLD-WALL* is a nod to the footwear brand’s iconic history

Dr. Martens’s British history is at the forefront of its collaboration with streetwear label A-COLD-WALL*. Inspired by the footwear brand’s 1461 silhouette and its popularity during the 1960s youthquake, the founder and creative director of A-COLD-WALL* Samuel Ross cites “Britain’s imposing post-war institutional and social housing structures” during that time as his primary design reference. The result is an effortlessly elegant pair of kicks that are season-less and steeped in heritage.

Canadian designer Iris Setlakwe is releasing two new collections this fall — one entitled I by Iris and the other after its namesake. While the first can be categorized as sophisticated streetwear, the other was designed “to be more trans-generational, keeping in mind the young professional and her mother.” Fans of the beloved Montreal-based brand won’t be disappointed as the new assortment keeps true to the elevated minimalist style of past seasons.

FDA Proposes a Plan For an Annual COVID Shot — What to Know
The Icon-ification of Anna Delvey
Hailey Bieber’s New Haircut Is Giving Margot Tenenbaum
How Fashion Broke, and Then Repaired, My Relationship with Lunar New Year
Where Are All the Plus-Size Male Models?