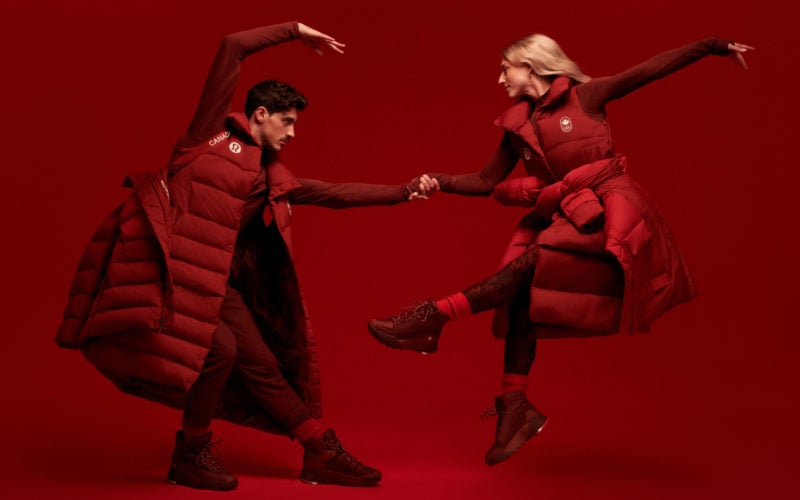 Did the Great White North just get a little cooler?

Let’s be clear — these are not your grandmother’s Olympic uniforms. They are Gen Z’s. As the Olympians-turned-models emerged onto the runway at the Lululemon Team Canada launch event on October 26, it immediately became apparent that the athleisure brand was taking its role as Olympic uniform provider quite seriously. Gone are the days of graphic tees and knitted mittens; in their wake lays oversized puffers, patterned leggings, cropped hoodies, versatile fanny packs and athletic bucket hats.

In what feels like a bid to cement Canada’s “cool-status” (Drake and The Weeknd can’t shoulder that responsibility alone!), the influence of streetwear and Gen Z was emphasized using smart styling choices. As seen in the promotional imagery and during the presentation, winter jackets are stacked atop one another to create bulky silhouettes; cold weather baseball hats are hidden under hoods; and even the snow pants are built to resemble joggers.

But perhaps where the Lululemon Team Canada Olympic uniforms truly deserve a gold medal is in the colour choice. As a nation with only two tones on our flag, the combinations are obviously quite limited. However, in an unexpected twist, the brand’s design team has made the bold decision for athletes to walk both the Opening and Closing Ceremonies in fully monochromatic ensembles.

To commence the event, Olympians will sport a mélange of five red hues in muted and bright varieties. Then to signal the end of the global competition, Canadians will be dressed in head-to-toe white and cream. Connecting both colourways is an abstract print inspired by the maple leaf as seen through a microscope.

As the first collection of the multi-year partnership (which will span four Games ending after Los Angeles 2028), expectations were understandably sky-high, especially as Lululemon replaced Hudson’s Bay after a 16-year run. But those excited to wear their national pride literally on their sleeve can rest easy, as the fabric innovation and effortless ease that have become synonymous with Lululemon are integral parts to this fashionable assortment. Officially available for purchase today on lululemon.com, below is a sneak peek of what to expect.

I Tried Wearing Tights As Pants
How to Tame Sweaty Hair After Exercising and Go Straight Out
FDA Proposes a Plan For an Annual COVID Shot — What to Know
Suddenly, The White Lotus Stars Are Everywhere
Neutral Workout Outfits to Start Your Year Off Right — and On-Trend