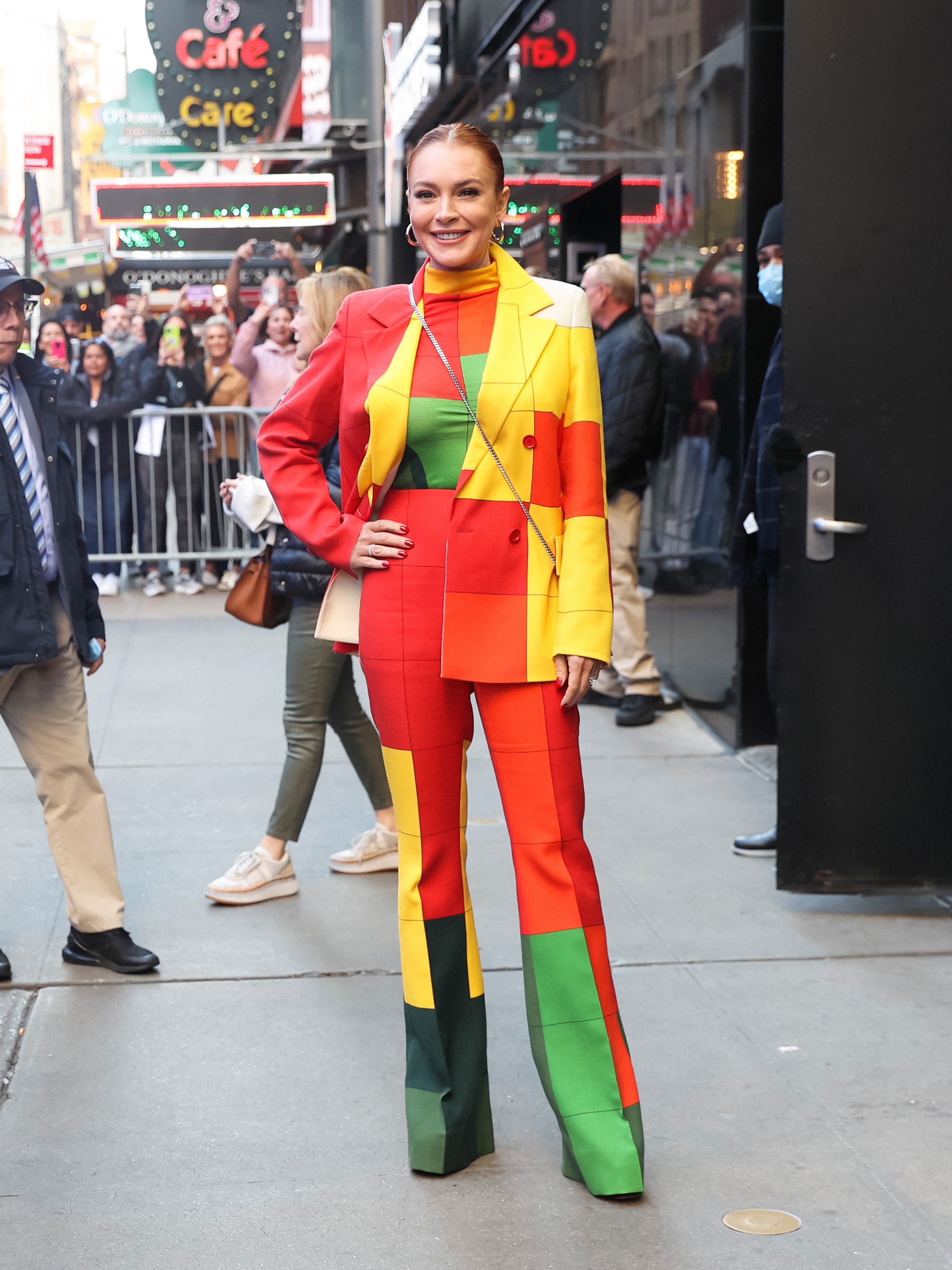 During a recent press trip, an international editor asked the question, “Which celeb do you think most desperately needs a rebrand?” While the intent was to make conversation with a group of relative strangers, the dinner transformed into an outburst of passionate opinions akin to a high school debate club, only more stylish. One person said Christina Aguilera (“The music industry punished her for choosing to raise her kids!”), and a few others said Britney Spears (“Someone get her off of Instagram!”). But interestingly, the majority chose Lindsay Lohan, and if her latest New York City photo opp is any indication, the Y2K icon agrees.

On November 8, Lohan arrived in NYC for an appearance on Good Morning America ahead of the release of her new Netflix movie, Falling for Christmas. The actress wore a bold and colourful suit by Akris, accessorized with gold hoops, a crossbody bag, and red Giuseppe Zanotti heels for the TV spot. It was trendy, memorable, and had Law Roach, FASHION’s November 2022 cover star and Zendaya’s longtime stylist, written all over it.

Indeed, LiLo and Akris credited the image architect on Instagram for the verging-on-viral moment. However, Roach has yet to comment. While we don’t doubt he’s still wrapped up in the buzz around his CFDA Stylist Award, many speculate there might be some leftover drama between Law Roach and Lindsay Lohan.

To refresh your memory, following the 2019 Met Gala, where Zendaya and Law Roach dressed up as Cinderella and her “fairy godbrother,” Lindsay Lohan blasted the young actress and her stylist on social media. “@Clairedanes, you wore this dress so beautifully, I don’t know why someone thinks that they can be more chic. Ever,” LiLo wrote, referencing the Zac Posen gown Danes wore in 2016 to the event. A few days later, when Roach was asked what he thought of the comments, he responded, “I don’t know her,” and abruptly left the interview.

As with most fashion and Hollywood dramas, though, it appears that the two have chosen to forgive and forget. Roach is one of the most in-demand creatives on the planet and is credited for transforming Céline Dion, Keke Palmer, Anya Taylor-Joy and others into style superstars. So why would he work with Lohan when he can pick whomever he wants? Earlier this year, he told FASHION, “All my girls have a certain ‘f*ck you’ mentality to them,” and one could argue no one exemplifies that more than Lindsay Lohan herself.

So does this mean we’re on the precipice of a fashionable comeback for the 36-year-old actress? Will we be spotting her on some major magazine covers and red carpets in the near future? Only time will tell. But if anyone can do it, Law Roach can. In the meantime, you can bet she’ll be a great dinner conversation starter.

8 Celebrity Hairstyles to Recreate for Your Next Holiday Party
Jenna Ortega’s Gothic Looks Are Pure Wednesday Addams
Exactly How to Do Jump Squats — Plus, Variations For Every Level
These Are the Best Black Friday Deals on Fitness and Wellness Products
These Beauty Gift Sets Make the Ultimate Last-Minute Holiday Gift