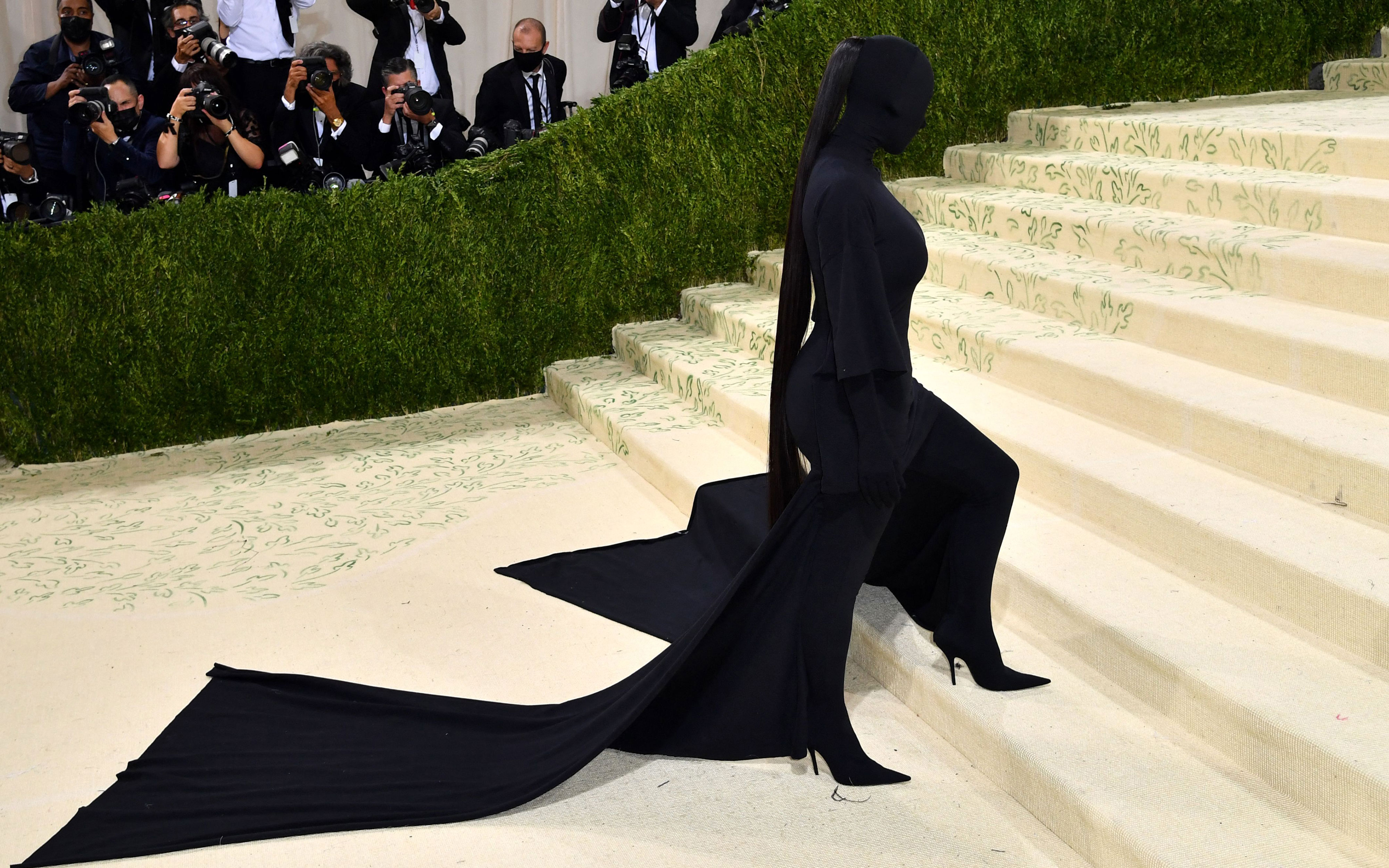 It’s the Tuesday after the second Monday in September, and unsurprisingly all anyone can talk about is Kim Kardashian, and Rihanna on the 2021 MET Gala red carpet.

After a COVID-induced hiatus, fashion’s most prominent event celebrated its glorious return with stylish stars serving looks inspired by “American Independence,” the theme of this year’s exhibit at the Metropolitan Museum of Art Costume Institute.

Arguably the most anticipated arrivals of the night — which is saying something considering the A-list attendees — Kim Kardashian and Rihanna donned similar all-black ensembles, both by creative director Demna Gvasalia for the French house, Balenciaga.

The reality star appeared first in a unique couture gown that came with a matching mask and train. As the ensemble completely obscured Kim’s face and body— which didn’t stop the Skims founder from spending hours on her makeup — the Kardashian’s entrance sent whispers into the crowds until Kendall Jenner greeted her sister and unmasked (pardon the pun) the guest’s identity. Kim was accompanied by Balenciaga’s designer for the evening, contrary to popular belief that it was a hidden Kanye.

Rihanna arrived fashionably late (because of course she did), and she didn’t come alone. Making their official debut as a couple, A$AP Rocky and the Fenty Beauty founder coordinated their looks, both rocking voluminous puffer pieces. While the rapper chose a colourful confection by American designer ERL, Rihanna wore a dark monochromatic Balenciaga dress, accessorized with Bulgari jewels and a ring by Nigerian designer Thelma West.

It has to be said, the gowns that Kim Kardashian and Rihanna wore were odd.

In a sea of denim, red, white and blue, Western motifs, patriotic icons and politically-fuelled looks all paying homage to ‘In America: A Lexicon of Fashion,’ the stark and somewhat minimalist approach the two fashion muses took was a little off-beat. As neither are strangers to dressing on-theme at the MET Gala (see Rihanna’s 2017 Pope impression or Kim’s camp look from 2019), it’s unclear how wearing a head-to-toe black ensemble by a French designer pays homage to the United States.

But did they stand out from the crowd? Yes. And that’s precisely the point.

Simply put, it took less than a few hours for the two celebrities to go viral. You’ll be hard-pressed to find any global media outlet that hasn’t reposted photos from the MET Gala red carpet and only a sprinkling who haven’t included Kim Kardashian and Rihanna in their photo lineup.

And you can bet Twitter came through with all kinds of reactions, jokes, and memes. While Rihanna was spared for the most part (although there were a few trash bag references), Kim was most definitely not. The Internet’s current favourites include comparing her Balenciaga dress to a Dementor from Harry Potter; commenting on the difference aesthetics between her and Kendall Jenner, i.e. “me and my anxiety when I go out;” and then general quotes about hiding in public à la “Me trying to hide from the plans I wish I never said yes to.”

But that’s what the MET Gala does best — it creates buzz. Considering how short the live event actually is, the press before and after can last for days, sometimes weeks, resulting in a complete social media takeover worldwide.

What makes this such a marquee and trending event is the unparalleled creative opportunity it presents to designers, stylists, and stars. For almost any other red carpet, the clothing can’t be seen as “wearing the person;” the artist has to look good but simultaneously shine in their own right. In this case, the exact opposite is true as the line between fashion and costume blurs into an over-the-top outfit that virtually consumes its wearer.

Kim Kardashian and Rihanna understood the assignment. Maybe not in terms of the “American Independence” theme of the exhibition, but they made their mark in the cultural zeitgeist, which is what really counts. After all, becoming a meme is the Internet’s highest honour.

Should We Really Expect Honesty from Beauty Influencers?
All Your Day Needs Is This 10-Minute Latin-Inspired Dance Workout
I’m Sorry, But the Peplum Is Back
Jane Fonda Reflects on Her Past Eating Disorder: “It’s a Very Lonely Thing”
We’re in the Age of Experimental Eyebrows