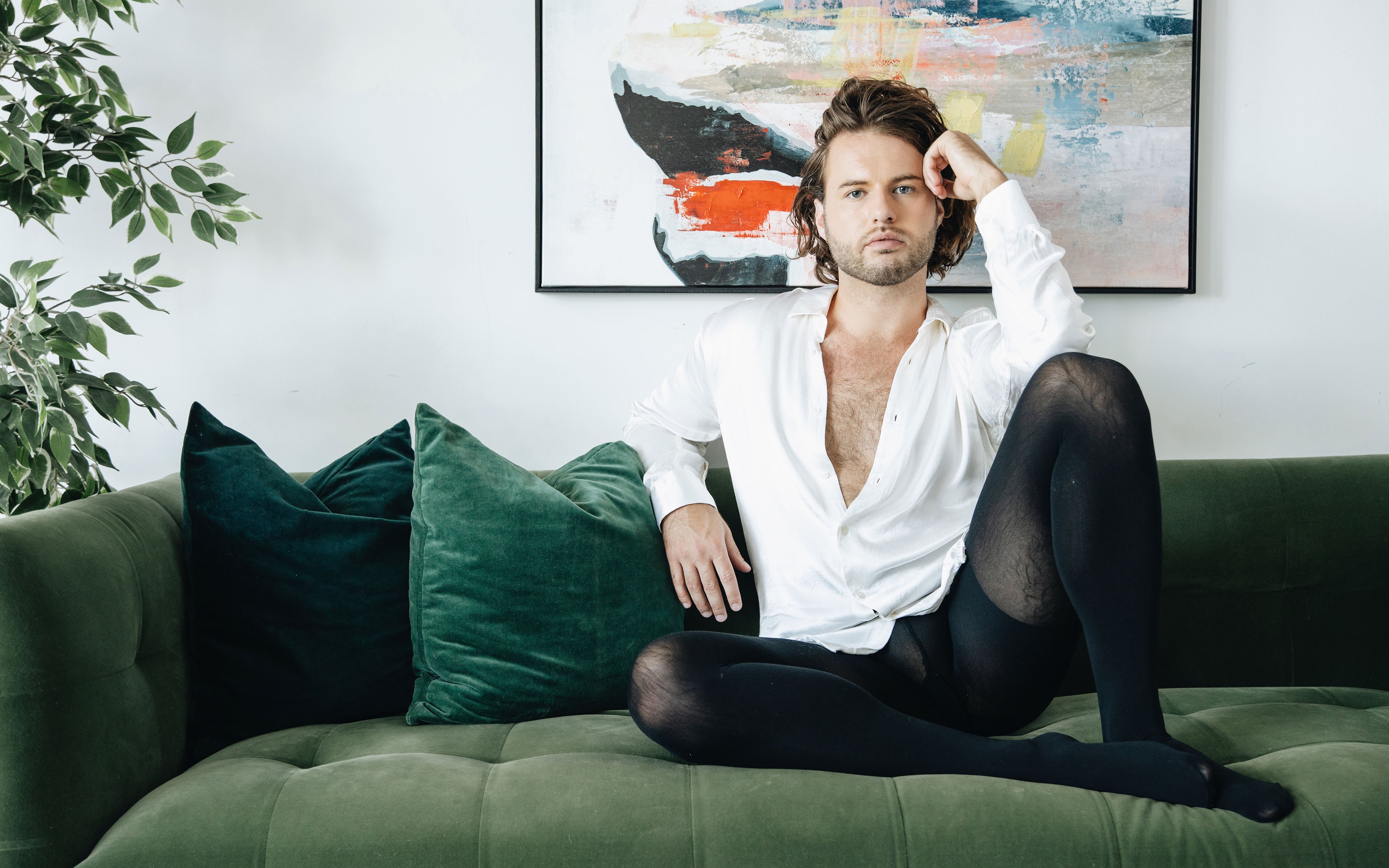 We spoke to Threads For Men founder Xenia Chen, Canadian drag superstar Tynomi Banks, and influencer Christian Thompson about shattering gender barriers — one pair of pantyhose at a time.

Men in tights are having a moment. Don’t believe me? Take, for instance, fashion-forward celebrities like Harry Styles and Lil Nas X, who have worn pantyhose under dresses on red carpets, press events and magazine covers. For Prada’s Fall 2021 menswear collection, the combined genius of Miuccia Prada and Raf Simons resulted in models strutting in skin-tight leggings and onesies (see look 22).  The impact of men’s hosiery can also be seen on our screens: RuPaul’s Drag Race, The Witcher, and Marvel’s Avengers have all become phenomenons and hey, if I can see the outline of “America’s Ass” — the title (fittingly) given to Chris Evans’ Captain America — then it counts as tights!

Besides caped crusaders and obvious Robin Hood references, pantyhose is gaining popularity as a unisex accessory. Enter the new line Threads for Men, a collection of Italian-made hosiery, designed by Toronto-based Threads to fit male anatomy better and end the stigma surrounding men in tights.

Founder Xenia Chen started conceptualizing the idea after learning through Facebook ads that 50 percent (yes, you read that right) of their existing customer base identified as male, with ages ranging from 20 to 75.

“I thought these guys must be buying them for their wives or their girlfriends or moms,” shares Chen on our call. “I soon realized that these men were actually just buying for themselves.”

As Chen and her team began diving deeper into research, unexpected groups emerged.

“We have a lot of customers who do drag, so they’re more open about it. And then there’s another group that is more secretive, wearing [hosiery] for comfort and warmth. We actually have a review on our website of this guy who works out in the bushes — where there are many bugs and mosquitoes — and he says that he wears tights because it prevents insects from biting him.”

Function versus fashion has been at the heart of the tight-aissance since the 13th century. Initially worn by men during Medieval times (and later abandoned for trousers around the 1800s), early leggings were constructed from woven stockings joined together with a cod-piece, a pouch that protected men’s crotches. While there are many theories behind the invention of tights — for additional warmth, to protect men’s skin while riding horseback, and/or to cover their legs as tunics got shorter — the intended purpose was one of practicality.

For Canadian drag superstar Tynomi Banks, hosiery serves a pragmatic purpose: giving her shape and adding to the overall transformation. Wearing six (!) pairs of pantyhose at one time, Banks says tights are the key to “melting” everything together by hiding pad lines, further cinching her waist, and covering leg hair. “It’s like the skeleton or the blueprint before you build the house,” Banks says with a laugh on our call.

A seasoned queen, it took her until Canada’s Drag Race to consistently wear hosiery and padding, as many of her costumes required it. While Banks says both “really elevate the look,” when I ask her what it feels like to wear so many layers, she describes it as a sensation of “​​blood loss” and like being in “a coma.”

The obsession with compression isn’t just popular amongst drag queens. Balancing the fine line between hosiery and leggings — the difference is in the thickness and material — athletes have been crucial to rebranding and recoding men in tights as “masculine.” The shift was immediate as NBA all-stars like LeBron James could be seen wearing them on and off the court, often under their b-ball shorts, citing better circulation and warmth as the reason for adoption. Under Armour, Nike and Adidas quickly followed suit, marketing tights as “compression” garments, and men’s athleisure — tights included — flourished.

Influencer and creator Christian Thompson of @christianconfidential started wearing athletic tights in high school, as running was a big part of his adolescence. Always around the track and with a background in modelling, seeing men in tights “never felt weird.”

“When you look at your favourite superheroes, they’re all wearing tights. Men in tights have been around forever, and you saw them on actors in the theatre or sports. So to me, it’s not even new. It just feels like it’s been there [all along].”

It wasn’t until Thompson started experimenting more with fashion that he considered adding pantyhose to his repertoire. However, he understands that for many men, it can seem daunting.

“​​For the everyday guy, I would say that there is [a stigma attached to wearing tights]. And I understand. It’s been very hard for men — we’re just starting to allow them to embrace taking care of themselves and [the thought that] they want to look good. We still have a long way to go, but the more we see it in fashion, on TV or just people wearing them in general, I think that will help alleviate the stigma,” says Thompson.

Threads for Men was founded for that exact purpose: to fight toxic masculinity and provide a safe space for men to express themselves.

“For decades, men have been expected to dress a certain way, and with [this new line], we saw an opportunity to break gender barriers we’ve set in the past as a society,” said Chen in a press release.

At the core of this barrier is the public’s issue with gender binaries within fashion. Genders have been segregated physically, with men’s and women’s collections on opposite sides of stores, and mentally, with masculinity and dresses being deemed mutually exclusive, almost since the beginning of retail. Gender-fluid fashion has had many ups and downs in the 20th century. Just as WWII saw women wearing pants and adopting more “masculine” silhouettes, the 1950s ushered in a time of rigid gender stereotyping. Then the 1960’s came and disrupted the entire fashion system with the help of YSL’s infamous Le Smoking suit (the first woman’s suit ever to be designed by a man) and David Bowie‘s androgynous style. More recently though, gender-fluid fashion has come back with a vengeance. Think: Alessandro Michele’s first menswear collection for Gucci in 2015, Billie Porter wearing a Christian Siriano ballgown at the 2019 Oscars and pretty much Lil Nas X’s entire wardrobe.

Despite WWD reporting 56 percent of Gen Z consumers have shopped in both male and female sections of the store, older generations haven’t been as quick to adopt this new perspective.

“The number of emails we get from men that are like ‘this has been my secret for 40, 50 years, and the only person who knows is my wife’ is crazy,” Chen comments on our call. “[I hope these men] feel because a brand is speaking to them and accepting them, they can finally accept themselves. We’re all about listening to our customers and making sure that people will feel included.”

For Banks, tights make her feel strong. “​​There is a power in putting on tights. It should be fluid, and it doesn’t matter what gender has it on. I feel sexy. I feel empowered.”

She recognizes this isn’t the case for everyone. Despite not wearing them out of drag, Banks encourages those nervous to wear tights outside to adopt a “mind your own damn business” mentality.

“I think people are doing it behind closed doors because they’re afraid of what other people would think. [Drag and Drag Race has helped] open those doors a lot more because the show promotes self-love and openness. Do you feel amazing and sexy and happy [wearing tights]? Then who am I to shame you?”

This One Technique Is Key to Getting Stronger, Trainers Say
Jordan Chiles’s New ’90s Hip-Hop Floor Routine Is an Absolute Party
Louis Vuitton’s New Watch Is Out of This World + More Fashion News
Is Period Underwear Safe? The Answers Are Still Murky
The Viome Full Body Intelligence Test Gave Me Surprising Info About My Heart Health