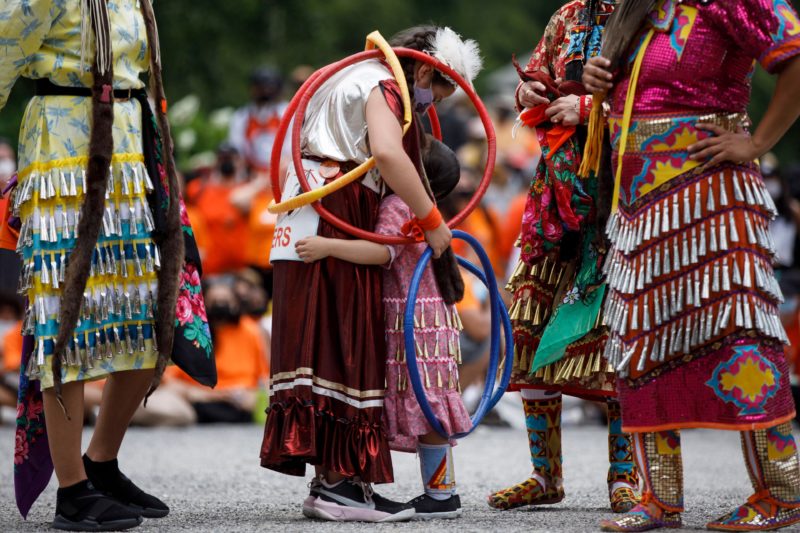 How to spend September 30 — and where to buy an orange shirt.

In 1973, a six-year-old Phyllis Webstad was preparing for her first day at St. Joseph’s Mission Residential School in British Columbia. In anticipation of the big day, her grandmother took to buy a new outfit. She picked out a bright, shiny orange shirt, which matched the excitement she felt to be going to school. But when she arrived at the Mission, she was stripped of her own clothes and her orange shirt was taken from her, never to be seen again.

Webstad, a Northern Secwpemc (Shuswap) from the Stswecem’c Xgat’tem First Nation, is one of many survivors of Canada’s residential school system. In 2013, she founded Orange Shirt Day, recognized on September 30, as a way of acknowledging the traumatic generational impact of residential schools on Indigenous communities. “The colour orange has always reminded me of that and how my feelings didn’t matter, how no one cared and how I felt like I was worth nothing,” Webstad writes on the Orange Shirt Day website. “All of us little children were crying and no one cared.”

In June 2021, the federal government announced that starting this year, September 30 will also mark the first annual National Day for Truth and Reconciliation. The new federal statutory holiday is meant to recognize the impacts of residential schools on Indigenous communities and families. Over the past few months, hundreds of remains were found on the grounds of former residential schools, where Indigenous children were forcibly sent between the 1870s and 1990s to be violently assimilated into colonial Canadian culture. It’s estimated that thousands of children died at these government-sponsored religious schools.

The Truth and Reconciliation Commission (TRC) was released in 2015, and has 94 calls to action — National Day for Truth and Reconciliation is a direct response to call to action 80, which called for a federal statutory day to commemorate the legacy of residential schools. There are plenty of ways that non-Indigenous people can support Indigenous communities on September 30, says Fallon Farinacci, a Red River Métis and healing advocate. For starters, educate yourself and discuss the history with the people in your own life. “[Non-Indigenous people] can review the calls to action. And for a simple step, maybe commit themselves to one that they can implement in their own life, or that they can bring to their workplace, or to their family,” she says.

“I was told a long time ago that the biggest change happens around the dinner table, the conversations that are had there are then brought out in the community. Having those moments of truth with your family is definitely key to standing in solidarity with Indigenous folks, and for each individual person to do something that day to further educate themselves on the truth.”

Farinacci adds that while this national recognition is a step in the right direction, there’s still work to do. Because the holiday is federal, there’s a disconnect with some provinces that haven’t recognized September 30 as a holiday. Farinacci wanted to spend the day with her kids and her community discussing this history, but because her son’s school board didn’t recognize the holiday, he doesn’t have the day off. Farinacci lives in Ontario, which is one of many provinces that are not recognizing September 30 as a statutory holiday, in addition to Alberta, Saskatchewan, Québec, New Brunswick and Yukon. Manitoba, Nova Scotia and Prince Edward Island will be formally recognizing September 30 as a statutory holiday, while British Columbia and Newfoundland and Labrador are commemorating the day, but not as a statutory holiday for all sectors.

“I have an Indigenous friend who had to take the day off work so that she could be with family. She shouldn’t have to take a holiday for it,” she adds. “I think that there’s a lot of work to be done to ensure that next year, it’s the day that it’s meant to actually be: a day to sit and reflect, and just a moment for families to come together.”

If you do have the day off and are non-Indigenous, use it to educate yourself, says Farinacci. There are plenty of gatherings, events and virtual workshops going on, and Orange Shirt Day has provided a growing list of events taking place across the country on September 30. The Gord Downie & Chanie Wenjack Fund, an Indigenous-led organization, has also provided a list of activities and educational resources to take part in on National Day for Truth and Reconciliation. Hold space for Indigenous voices, but don’t expect or ask Indigenous people to educate you on the history of residential schools, Farinacci adds.

Sporting an orange shirt is another simple way to stand in solidarity with Indigenous communities on September 30, but the shirts are currently in high demand and hard to find. If you can’t get an orange shirt from an Indigenous vendor, Indigenous advocates are asking that Canadians don’t resort to buying from large-scale retailers, who are now selling orange shirts.

“It’s really unfortunate that you have big box companies that are [mass producing and selling] the orange shirts,” says Farinacci. Indigenous advocate group Toronto Indigenous Harm Reduction states that by selling orange shirts, non-Indigenous corporations are missing the point of Orange Shirt Day, which is to support Indigenous people. If you can’t get your hands on an orange shirt, consider instead donating directly to an Indigenous cause, like the Indian Residential School Survivors Society, and wearing something second-hand.

On Instagram, Farinacci reached out to her network to compile a list of Indigenous-owned businesses (or reputable organizations who are donating all of their profits to Indigenous causes) that have shirts and other items available for purchase on September 30. They are listed below. Shirts are in high demand and may be sold out or take weeks to deliver. To buy orange shirts beyond September 30, Farinacci has an Instagram Stories highlight called “buy orange tees” where she’s linked businesses that continually sell orange shirts.

Wilfrid Laurier University is not Indigenous-owned but is working directly with Woodland Cultural Centre and donating one hundred percent of its profits.

Suddenly, The White Lotus Stars Are Everywhere
The Most Iconic Oscars Looks Ever, As Chosen By FASHION Editors
Camila Mendes Candidly Addresses Past Eating Disorder: “Really F*cks With Your Process”
MCM Teams Up With Singer Tate McRae + Other Fashion News
Jennifer Garner’s Box-Jump Workout Is Not For the Faint of Heart