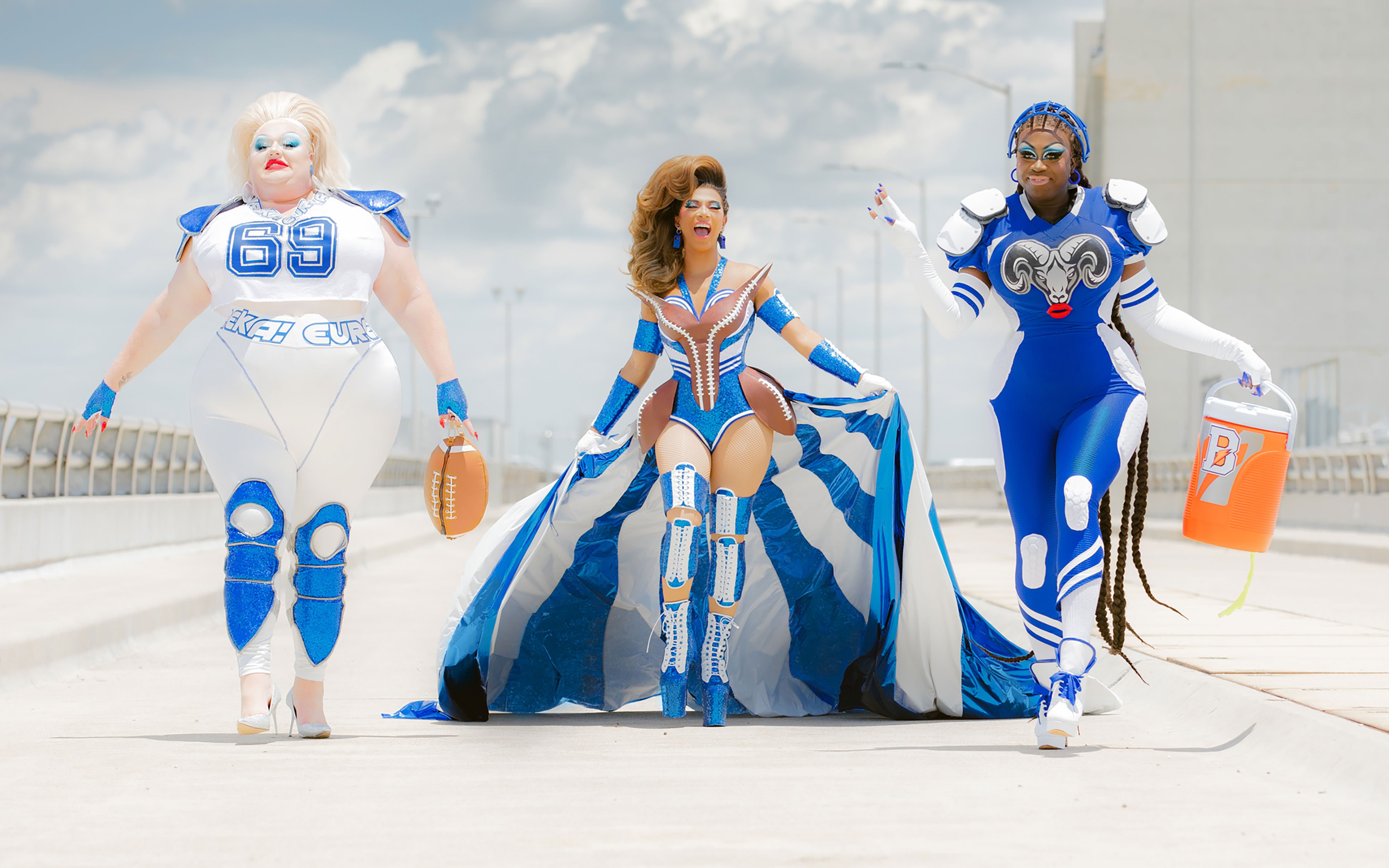 The drag queen superstars spill the tea on the new season of their hit show, the death-dropping looks, and what Coming Out Day means to them.

Move over, Batmobile. HBO’s We’re Here — the drag documentary-meets-makeover series starring Shangela Laquifa Wadley, Eureka O’Hara and Bob the Drag Queen — might possibly feature the most fabulous forms of transportation ever created. In the opening scene of season one (which premiered in 2020) and season two (to be untucked today), the world was introduced to three of the campiest trucks to ever grace the small screen: a fuschia-bowed set of wheels, a mobile-enlarged elephant and a literal “purse first” vehicle.

“I don’t want to ruin it for you, but I actually never drove the [purse] truck myself,” shares Bob over video chat. “When we did season one, I didn’t even have a driver’s license, so I legally could not drive that truck.”

As the drag-mobiles are captured driving through American suburban streets in the opening minutes of the new season, it’s immediately apparent how accurately this scene represents the entire series. For those unfamiliar (or those without an HBO subscription), We’re Here is a six-part show that follows three of the most exuberant exports of RuPaul’s Drag Race as they travel across the U.S. and adopt various small-town residents with a connection to the LGBTQ2S+ community as drag children. Each episode starts with the hosts — all decked out in their finery, hence the need for trucks with space to haul it all — sissying that walk through the main stretch of the community, culminating in a fabulous lip sync performance (because, of course!). Along the way, expect to cry — and not just a few tears, we’re talking ugly sobs — as the tragic backstories of the makeover-ees take centre stage.

“I tell people all the time when they say, ‘Oh my God, I cried,’ I’m like, ‘You cried? It wasn’t just a one-hour event — I was there for ten days! I was crying every day for ten days,’” Bob reveals.

Shangela also admits the experience is even more emotional than what’s presented on TV. “We’ve been with our drag kids since day one, and they’re sometimes a little apprehensive and cautious. And then you see them work so hard, not only on themselves but [also] putting together this number, so that when the final note hits at the end of the song, you’re like, this is almost a different person than seven days ago. But it’s not — it’s a free person, and it’s so beautiful.”

After spending 15 minutes with each queen on video chat, it’s slightly alarming how quickly one can feel safe to bare their soul. Effortlessly enthusiastic, warm and funny, it’s no wonder they can connect with the people around them so quickly.

“​​Watching the first season, the one thing I learned was that it’s okay for me to be super vulnerable,” shares Shangela.

Eureka agrees, confessing they better understood the show’s impact on these communities moving into season two. “Season one made me understand how to better communicate with my drag daughters, what conversations I wanted to have more of, and I just wanted to get closer with every person that I worked with.”

However, COVID-19 had other plans. The proverbial dark cloud to the hosts’ collective ray of sunshine, series two was shot around December 2020, smack in the middle of the pandemic. As masks became a mandatory accessory, the queens agreed that there were definitely highs and lows.

Bob names the atmosphere of the final performances as the most significant change. “We used to come with a big crowd going bananas, but it became much more subdued with everyone wearing masks, and there were very few people there.”

Eureka adds that the virus did disrupt the queens’ connection to the townspeople, who were already on the defensive in such a close and intimate setting. However, it just made one-on-one time with their drag daughters that much more valuable. “They get to be around people that are like them. You see them open up differently.”

While the show undoubtedly inspires comparisons to RuPauls’ Drag Race — the heart-to-hearts, memorable quips and drag transformations — We’re Here builds on the world that RuPaul Charles created and takes it a high-heeled step further. As the revolutionary OG competition series has pushed pop-culture boundaries, it has also been criticized for failing to represent the trans, bio queen and drag king communities.

But in We’re Here, the category is inclusivity. Townspeople with diverse backgrounds, including members of the trans, non-binary, straight, gay and autistic communities, are celebrated and are the show’s true royalty, as they fight homophobia, toxic masculinity, their “inner saboteur” and sometimes even family members. It’s perhaps more fitting to deem the HBO series a Queer Eye-meets-Drag Race fusion, featuring the best qualities of both series and elevating the art form of drag to an entirely new level.

“I’m going to say this out loud — this is the best drag on TV,” says Bob. “The drag we have on this show is really high-end, and we have some insanely amazing couture.”

Case in point: Shangela’s western denim gown from the first season. Fans of the star — known for her cathphrase “Halleloo” —  were quick to gag (but not in the good way) over the unjust exclusion of the look, created by her costume designer and constant collaborator Diego Montoya, from the Americana Met Gala red carpet in September.

“I’m looking for Anna Wintour to put me on the list next year,” Shangela laughs. “But to me, every episode of We’re Here feels like the Met Gala runway because we have custom looks that have been created with different themes for each city. [See season two’s football-inspired ensembles]. We are so blessed to work with the most amazing designers and artists and also, baby, I get to keep the clothes.”

The transformational powers of drag are not to be disputed — just revisit any episode from the first series. Through hair, makeup and clothing, Shangela, Eureka, and Bob play fairy godmothers, and the magical metamorphoses of their drag daughters would make even Cinderella sashay away.

All three drag mamas are hands-on with their children while planning the climactic reveal, and Shangela notes it’s a collaborative effort between all departments. “To me, it always starts with the music. I want them to go on stage with whatever message or whatever represents their journey the best. Once the song is selected, I call my designer, and I will come to him and say, ‘Okay, here’s the song, this is the mood. What do you have to create?’ And he will sketch up something awesome.”

For all its positivity and motivational mantras (think “hope is here to slay” from the show’s promos), We’re Here is also a stark reminder of the obstacles the community continues to face. For every moment the community welcomed the queens and their transformations with open arms, there are still groups of angry bystanders yelling derogatory comments at Shangela, Eureka and Bob. While the queens handle the overtly conservative townspeople with empathy and humour (drag is not a contact sport), Coming Out Day — which falls on October 11, also the date of the season two premiere — is a reminder that it’s not as easy for everyone.

“I do get a lot of questions, not just from people but from parents about coming out and how they can help,” reveals Eureka. But her go-to advice is to always live your truth. “Whether it’s gender expression, your sexuality, or whatever you have to come out about, do it on your own time. There are no rules except the rules that you create for yourself. Have faith in the people that you love and that love you. If they don’t accept it, that’s okay, but I promise you that there are people in your life that already know and don’t care.”

That’s a powerful message for anyone to hear, no matter their background. But still, it’s a credit to the queens and activists that have come before them that such a personal confession can be so readily accepted.

“I was thinking about the people who have created spaces for me to be sitting on this Zoom call right now, and how grateful I am that people have allowed me to navigate the world,” says Bob about LGBTQ2S+ History Month, an observance held annually October. “I think about Lady Bunny, Peppermint, William Dorsey Swann, Dr. Angela Davis, and I’m just living in a place of gratitude. And you know, I’m also thinking about how to make sure that someone coming after me has a great space, too. So I’m making sure that I’m doing my thing to contribute to history going forward.”

And therein lies the magic of We’re Here. By bringing the inclusivity of the Drag Race Werk Room to communities who need it most, it forges connections, and has proved to be a reminder to anyone who has ever felt out of place — not just the LGBTQ2S+ community – that we deserve to be loved for exactly who we are. It’s all right there in the title, we’re here — you are not alone.

“I hope that people are inspired to remember that it’s so important to uplift people of our community and people from different communities that may not be even like us,” reflects Shangela. “Know that so many people feel isolated, alone, and it’s our job to try and help and bring some positivity to the world.”

After all, in the immortal words of Ru himself, “We’re all born naked and the rest is drag.”

Is Anyone Thriving More Than Anne Hathaway Right Now?
The Viome Full Body Intelligence Test Gave Me Surprising Info About My Heart Health
Jane Fonda Reflects on Her Past Eating Disorder: “It’s a Very Lonely Thing”
How to Tell When You’re Actually Ovulating
Dorian Who Releases a Thought-Provoking Collection + More Fashion News